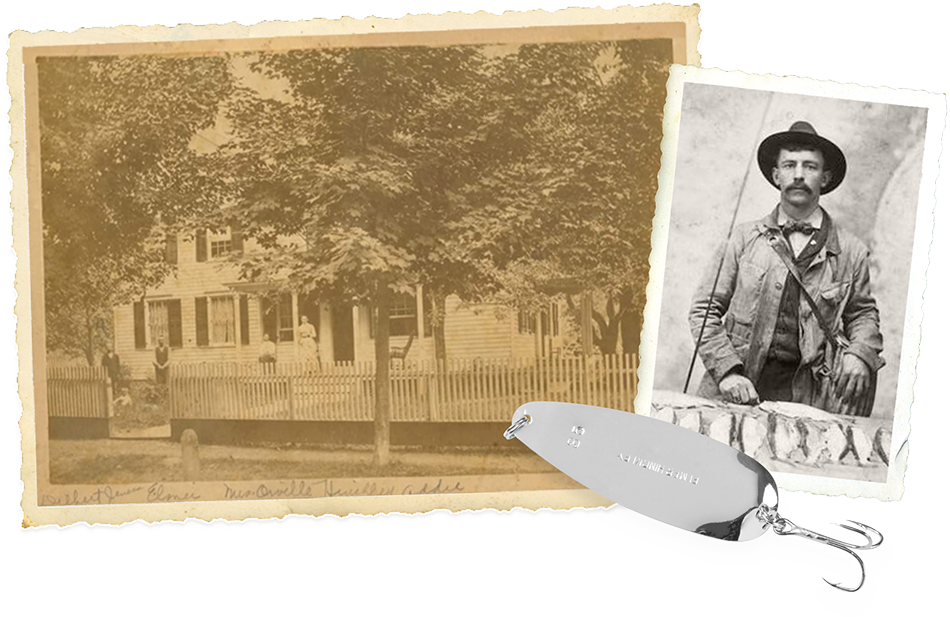 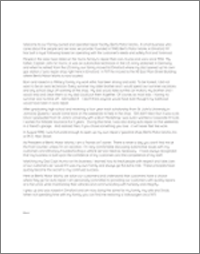 Message from the Owner

Elmer HInckley Fishing Tackle is one of America's oldest fishing spoon companies and has an amazing backstory.

Please take a moment to read my short message and then sit back and enjoy the story that was years in the making.

Since 1877, Elmer Hinckley Fishing Tackle has been the lure of choice for generations of fisherman. It all started with the annual fishing competitions on Canandaigua & Keuka Lake and one man’s competitive drive to catch more and larger fish. 150 years later, fishermen are still trying to land the big one and the brainchild of Elmer and his family are still helping them do it.

Elmer’s lure of choice consisted of silver coin tea spoons with their handles removed that mimicked the fluttering movement of the smaller fish that the local trout and muskies fed on. Competitiveness drove Elmer, his two cousins, Edwin and Bert and friends Scott Sutton, Skip Pierce and Lindsey Adams to come up with their own version of the “spoon” after their wives demanded they stop looting the family utensil drawers to replenish their tackle boxes — and Elmer Hinckley Fishing Tackle company was officially born in 1877.

In 1899, Elmer Hinckley. a businessman, farmer, avid outdoorsman, and charter member of the Naples Fish & Game Protective Association lost an eye in a hunting accident. Forbidden by his wife Adelaide to continue hunting, Elmer began to focus on fishing. 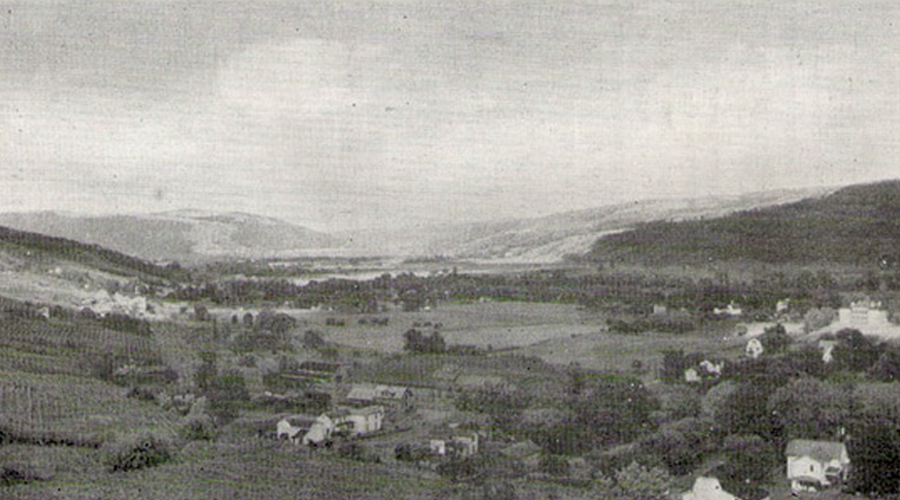 A Hobby Becomes a Going Concern

Production in the early days was done around the kitchen table, with the friends dividing up the process of cutting blanks from sheets of metal, shaping them by hand and polishing and plating them in silver before adding treble hooks to create the finished product. The coin silver teaspoon bowl, what we call today Flutter spoons had the greatest success due to their “falling leaf” action that resembled a wounded baitfish. Elmer’s marketing plan was truly a grassroots endeavor as he would bring his daily catch into the local bait shops around Keuka Lake to have them weighed. Impressed by his haul, the locals would invariably ask him where he was fishing and what he was using to land such large fish.

Here the businessman took over from the fisherman and Elmer would then sell the interested anglers some of his spoons. Over time, word spread of these spoons that were proving irresistible to the local fish population and Elmer began selling his lures to shops large and small around the Finger Lakes.

The Hinckley product line kept expanding as Elmer would create new shapes and sizes based on the eating habits of the bigger fish he caught as well as requests from his fellow anglers. What began as a silver spoon, soon expanded into copper and gold plated versions and a hammered version available for each model. 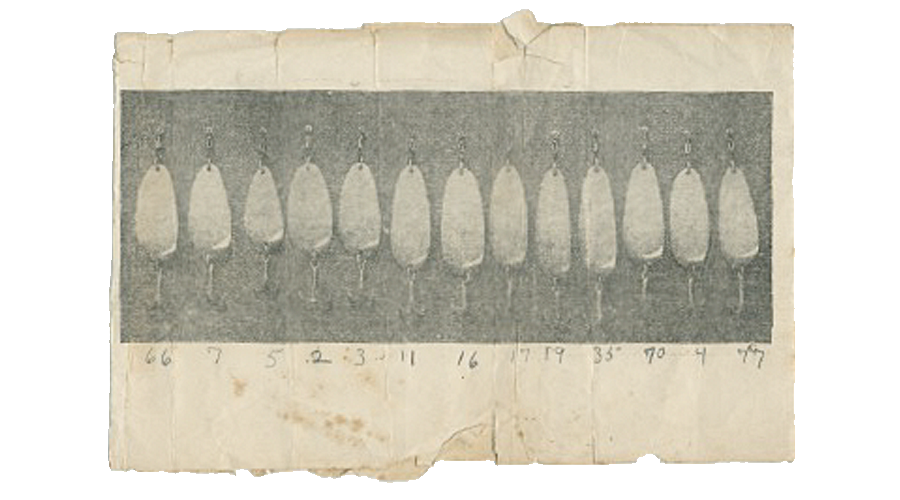 When Elmer passed away in 1916, his daughter Mabel continued her father’s legacy and built up a thriving mail order business with an expanded product line of new shapes and sizes. Production continued as before, with lures being cut and shaped by hand as each order was received. Mabel ran the business in Naples until 1953.

1954-55 were years of change for the company, Mabel passed away and her daughter Mary took over operations with her husband Carl Misel. Along with moving the business to Troy, New York, the couple started to innovate their production process. While the majority of the steps needed to produce their spoons still involved quite a bit of hands-on work, dies were created to make manufacturing easier and the plating process was brought in-house by Carl.

Many fisherman came for lures before going far and wide to catch the “big ones”. Along with the old time Hinckley favorites, the Misel’s added custom made spoons for fisherman with fanciful ideas. Often, the model designations were the initials of some of these fishermen.

Mary and Carl continued the business until their retirement in 1983 when they sold the company to their son Charles, who along with his wife Caroline, took the business to Pine City, Minnesota. The fourth Hinckley generation added to the product line by producing other fishing products like the Starport Trolling System of Trolling Boards, the Starport Board, the Walleye Trolling Ski, and Starport Line Releases.

Much like in the Finger Lakes, Elmer Hinckley Fishing Tackle became revered among the fishermen of the Great Lakes region as the lure that fish “preferred” — giving rise to the company’s tagline “Fish prefer Elmer Hinckley Lures.” 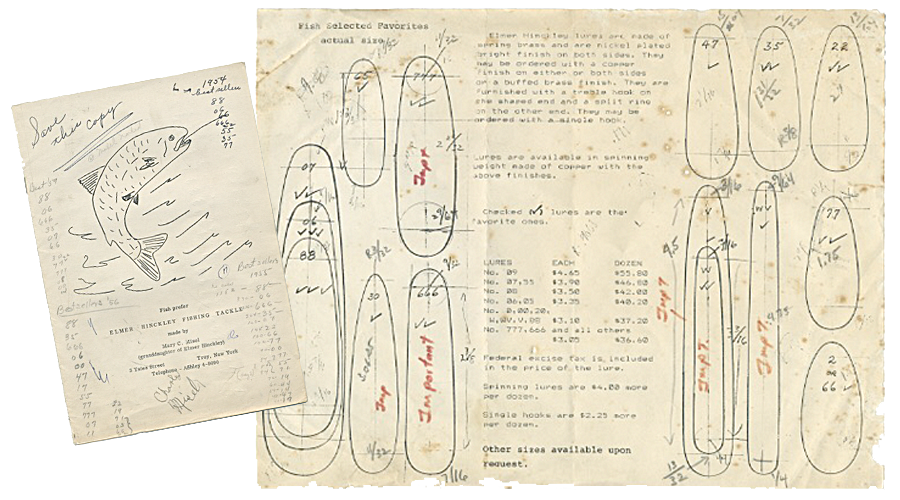 Elmer Hinckley catalog from 1954 with owner’s notes on inventory.

Honoring The Past: 2014 to The Present

After the passing of Charles Misel in 2013, Peter and Sarah Narkiewicz of Hartford, New York bought the business. Once again the original dies and equipment returned home to the Adirondacks in New York state. Peter ran the business for the next 8 years reintroducing local fishermen to the celebrated spoons. 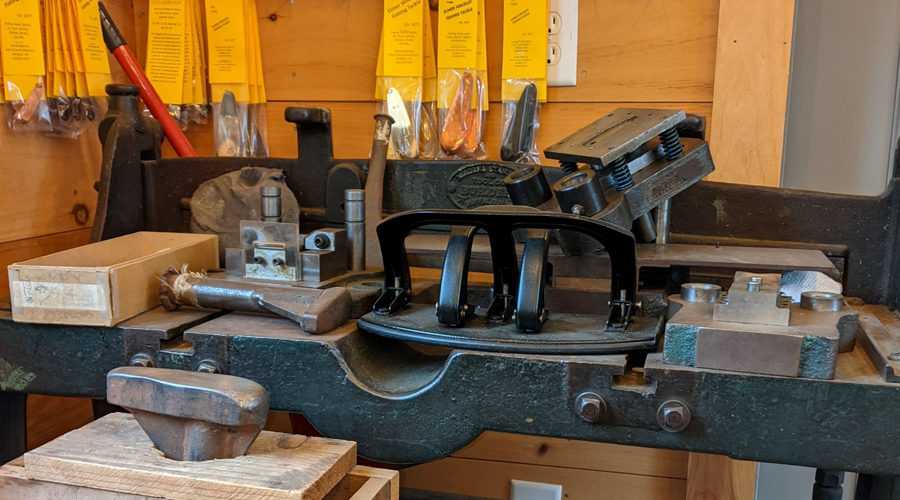 The story and tradition of Elmer Hinckley Fishing Tackle now continues as current owner, Pete D’Urso produces the time-honored designs in his workshop (nicknamed “The Lab” by Pete’s daughters) using the same care and dedication as Elmer and his family used way back in 1877.

Pete is bringing back older style spoons that fell out of production and continuing the tradition of handcrafting fish preferred favorites. His daughters, like the women before them, have started working in the shop picking up the skill of hand cutting spoons as well. 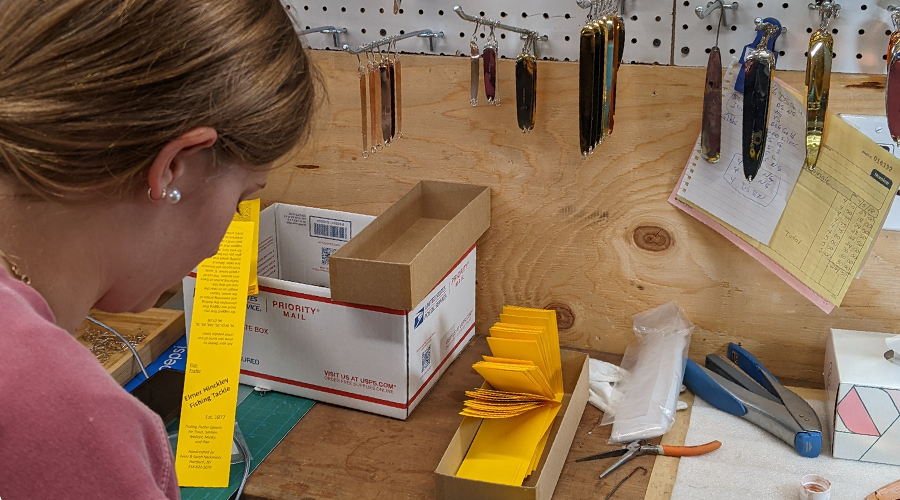 What began as a “sell-as-you-catch” company grew to be sold to distributors nationwide as guides from Lake George, Lake Champlain and the Adirondacks and fishermen from all across the country came to know and love the company’s products. Today, local trout fishermen on Westchester Country reservoirs are using Elmer’s lures to great success. Since 1877, Elmer Hinckley Fishing Tackle have been handcrafted items, and they still are today. Each lure is given individual attention to make it the best possible fishing lure for the fisherman and, most importantly – for the fish.

We wish you successful fishing with Elmer Hinckley lures that have been manufactured and used for over 145 years. Remember, “FISH PREFER ELMER HINCKLEY LURES”. Practice catch and release and leave some fish for tomorrow and for tomorrow’s kids.